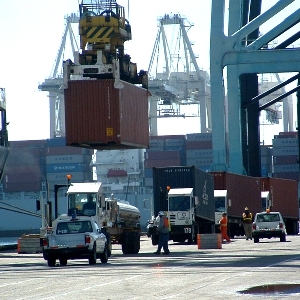 At YearlyKos I got the opportunity to ask some Teamsters reps about the the un-organized drayage operations that serve the Ports of Long Beach and Los Angeles (POLB/LA). As the choke point for imports into the United States, it seemed like a logical place to get leverage for other organizing efforts. I was told that the Teamsters basically got kicked out of the ports when the trucking industry was deregulated and hiring owner-operators became the standard MO for the industry. The Teamsters ominously said that they were already laying to ground work to reorganize drayage drivers and “we’ll be back”.

The following article is about Governor Schwarzenegger’s veto of a bill that would have granted collective bargaining rights to drayage drivers, for the second year in a row. While I’m sure the governor would deny there’s any connection, it’s interesting to note that transporation companies are reliable Republican contributors. Trucking PACs gave 80 percent to Republicans in 2006, the top 20 contributors consistently give over 70% of their contributions to the GOP.

The eTrucking article on the subject quotes extensively from Todd Spencer, executive vice president of the Owner-Operator Independent Drivers Association. The OOIDA cites initiatives like privatizing highways, building toll roads, allowing Mexican truckers to haul load deep into the American interior and building a mind-blowingly massive NAFTA super–highway as key issues that threaten the American trucker. Ironically, these are all Republican-backed initiatives. I won’t tell Mr. Spencer to take his own advice, but he did say “If truckers reject lawmakers who voted in favor of the [Indiana toll road] lease, that sends a message around the country…” Language on the OOIDA website suggests a future defection from the Republican fold:

[W]hen it comes to politics, the greatest advantage that large trucking corporations, the American Trucking Associations (ATA) and other political opponents have had over small-business truckers and professional drivers is the amount of money they contribute to political campaigns. They are well-funded and have agendas that are often counter to the interests of OOIDA members. (OOIDA-PAC)