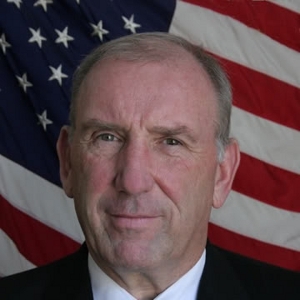 Update: Welcome to our visitors from the OC Weekly: Rohrabacher Cuts and Runs.

While waiting for Monday’s debate between Congressman Dana Rohrabacher and challenger Jim Brandt, I met a young Marine outside. His blue eyes told me he’d served in Iraq, so we talked about other things. He’s on leave from out-of state and asked me who the candidates were. Then he told me about roadside bombs on the road to Fallujah. This article isn’t about him.

It’s a strange thing to go to a debate in Orange County, and discover the Democratic candidate has the home field advantage.Jim Brandt entered the Golden West College to champion’s applause and calls of “Semper fi!!” This was not lost on the ignored Congressman. Rohrabacher‘s sad, sheepish smile suggested he knew what to expect. After his experience at CSU Long Beach earlier in the day (YouTube pending), his staff called and changed the rules for the evening’s debate.

The Congressman cooked each response in illegal immigration, seasoned with lower taxes, Red China, Imperial Japan and Hitler. As if called to the blackboard without doing his homework, the incumbent avoided facts. When asked how the $1.6 billion SAFE Port Act could be used effectively to protect the Port of Long Beach, Rohrabacher acknowledged that mistakes had been made, that the money could probably be used more efficiently but reassured the crowd that his office was working hard to get it right. He gave similar answers on the economy, illegal immigration, the deficit, healthcare and the war in Iraq. Rohrabacher’s four minute answer on gay marriage was indecipherable but seemed to have something to do with the genealogy of arcane laws. He claimed State Senator Alan Lowenthal‘s successes with extending port hours and container fees for himself. While he tried to maintain measured tones, midway through the debate Dana Rohrabacher attacked the crowd with pointed finger before regaining his composure and directing the rest of his responses to either his lectern or his opponent.

Jim Brandt gave a firebrand lecture on public policy. His delivery of detailed and substantive proposals was an impassioned indictment of Beltway Republican policies. Jim Brandt noted SAFE Port will allocate millions (not billions) to POLA/LB for port security. He proposed single-payer catastrophic health insurance, economic incentives for employers to comply with immigration laws, religious freedom as the answer to gay marriage concerns, the application of private sector accounting rules to government, and taking the advice of generals in the case of Iraq. Brandt didn’t hammer on Rohrabacher, he took him to school.

After the debate, Brandt met with audience members as mutually agreed while Rohrabacher vanished through a side door. It seems that in California’s 46th Congressional District the incumbent, like Republicans across the country this fall, fell victim to GOP frames: he talked about Staying the Course on every issue and then Cut and Ran in his own district. “Where’s Dana?” evolved from a surprised question between neighbors into the chant of an angry mob.

Before left I saw my new friend again. “What’s going on?” he asked. “Brandt’s over there but Rohrabacher left,” I replied. Veteran’s eyes surveyed the crowd, looking for Congressman Dana Rohrabacher. “He’s afraid of the Marines,” he replied. “Too bad. I wanted to talk to him.”