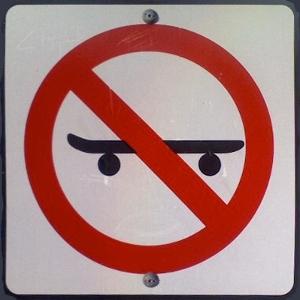 The criminalization of youth continues, same as it ever did. Relying on the same tired excuses of protecting public property from use by under-aged citizens and protecting kids from the risks of physical activity, the Manhattan Beach city council banned jumping “on or over objects” on a skateboard. Violating the ban, which is inclusive of both public and private property, carries a penalty of up to 1 year in jail and a fine of up to $2000.

The ban was reportedly inspired by the sudden popularity of new concrete plazas at the Metlox project, a commercial redevelopment which includes a “police and fire facility”. “It was like a total attraction,” said Deputy City Manager Sherilyn Lombos. “I don’t know how they find it, if they put a bulletin out, a press release.”

“The police made it a high priority to be out there and to talk to the skateboarders and say, ‘No skateboarding is allowed here,'” said Lombos. With Burglary down 6.2%, robbery down 26%, DUIs down 43% and arrests down 31%, it only makes sense to write new laws for Manhattan Beach officers to enforce.

And if you’re going to criminalize the activities of class of citizens, it’s best that they not be able to vote.