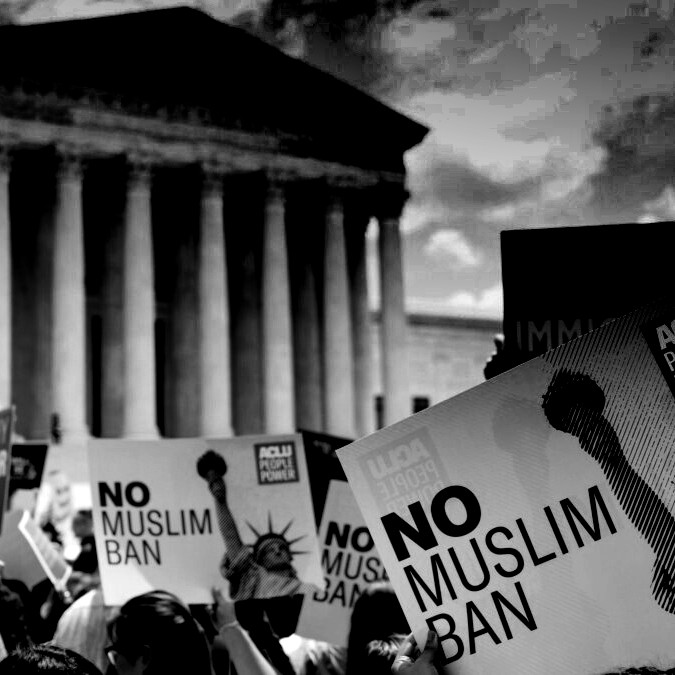 I have found two ways in which Trump’s ban on Muslim visitors could be enacted. The first way is a constitutional amendment.

Cliff Gilley and I have gone nine rounds on whether this is the end of it. While his position is widely held among legal scholars, I don’t agree. My dissent comes from a closer reading and pre-existing knowledge of the Immigration and Nationality Act (INA). Before we go further, it is worthwhile to have a handle on Expedited Removal, the administrative process by which aliens are excluded and removed from the United States upon arrival.

From the Congressional Research Service’s report for Congress entitled Immigration Policy on Expedited Removal of Aliens:

Expedited removal is a provision under which an alien who lacks proper documentation or has committed fraud or willful misrepresentation of facts may be removed from the United States without any further hearings or review, unless the alien indicates a fear of persecution. Congress added expedited removal to the Immigration and Nationality Act (INA) in 1996 [that would be IIRAIRA -ed], making it mandatory for arriving aliens… Until recently, expedited removal was only applied to aliens at ports of entry.

IIRAIRA eliminated the distinction between exclusion and deportation proceedings, combining them into removal proceedings. Removal proceedings are generally the sole procedure for determining whether an alien is inadmissible, deportable, or eligible for relief from removal.

The INS sought to deport eight temporary and permanent residents “all of whom belong to the Popular Front for the Liberation of Palestine (PFLP), a group that the Government characterizes as an international terrorist and communist organization”. The law provided for the removal of aliens who advocate communism and the INS decided to use the administrative exclusion provisions of IRAIRA (no judicial review).

Respondent resident aliens filed this suit, claiming that petitioners, the Attorney General and other federal parties, targeted them for deportation because of their affiliation with a politically unpopular group, in violation of their First and Fifth Amendment rights. After the District Court preliminarily enjoined the proceedings against respondents, but while an appeal by the Attorney General was pending, Congress passed the Illegal Immigration Reform and Immigrant Responsibility Act of 1996 (IIRIRA), which, inter alia, repealed the old judicial-review scheme in the Immigration and Nationality Act, 8 U. S. C. §1105a, and instituted a new provision, 8 U. S. C. §1252(g), which restricts judicial review of the Attorney General’s “decision or action” to “commence proceedings, adjudicate cases, or execute removal orders against any alien under this Act” “[e]xcept as provided in this section.” The Attorney General filed motions in both the District Court and the Ninth Circuit, arguing that §1252(g) deprived them of jurisdiction over respondents’ selective-enforcement claim. The District Court denied the motion. The Ninth Circuit, consolidating an appeal from that denial with the pending appeal, upheld jurisdiction and affirmed the District Court’s decision on the merits.

Here we have a First Amendment challenge, made by aliens, which have been denied judicial review by an act of Congress. The Court ruled that Congress may indeed deprive federal courts of jurisdiction and remove aliens using IIRAIRA’s administrative process. There’s a “but…”

Scalia delivered the opinion of the majority:

To resolve the present controversy, we need not rule out the possibility of a rare case in which the alleged basis of discrimination is so outrageous that the foregoing considerations can be overcome. Whether or not there be such exceptions, the general rule certainly applies here. When an alien’s continuing presence in this country is in violation of the immigration laws, the Government does not offend the Constitution by deporting him for the additional reason that it believes him to be a member of an organization that supports terrorist activity.

Ginsburg, joined by Breyer, concurred but wished to address the “outrageous” possibility:

Under our selective prosecution doctrine, “the decision to prosecute may not be deliberately based upon an unjustifiable standard such as race, religion, or other arbitrary classification, including the exercise of protected statutory and constitutional rights.” (?) I am not persuaded that selective enforcement of deportation laws should be exempt from that prescription. If the Government decides to deport an alien “for reasons forbidden by the Constitution,”(?), it does not seem to me that redress for the constitutional violation should turn on the gravity of the governmental sanction. (…)

In sum, were respondents to demonstrate strong likelihood of ultimate success on the merits and a chilling effect on current speech, and were we to find the agency’s action flagrantly improper, precedent and sense would counsel immediate judicial intervention. But respondents have made no such demonstration.

We get a sense of what

« Making a conductive copper ink pigment
“By What Authority?” Trigonometry of EO 13769 at the Border »