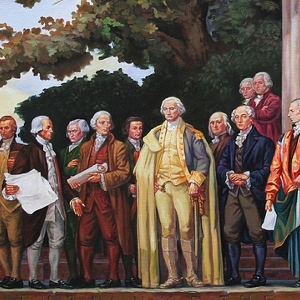 While checking out an immigration diary at Red State, rehoboam tipped me off to a very, very interesting article in the Washington Post, authored by George Will and entitled “An argument to be made about immigrant babies and citizenship” (March 28, 2010).

George Will’s argument is that

To end the practice of “birthright citizenship,” all that is required is to correct the misinterpretation of that amendment’s first sentence: “All persons born or naturalized in the United States, and subject to the jurisdiction thereof, are citizens of the United States and of the state wherein they reside.” From these words has flowed the practice of conferring citizenship on children born here to illegal immigrants.

Mr Will is an intelligent man, and his article draws on the authority of Dr. Lino Graglia of the University of Texas law school, so this argument they’ve put forward deserves scrutiny and consideration. I’m not a constitutional scholar, by any means, but you and I both know how to read so let’s investigate this claim.

Both gentlemen start with the text of the Civil Rights Act of 1866. This is interesting history, no doubt, but the relevance to the interpretation of the text of the 14th Amendment, which was ratified two years later, is neither compelling nor convincing. Engage with it if you like, but I consider it a curious but irrelevant digression into textual analysis of repealed legislation (the credibility of their historiography, incidentally, will be thrown into doubt shortly). We’re interested in the interpretation of the 14th Amendment, and these gentlemen have weightier evidence to present.

The decision seemed to establish that American citizenship is not an ascriptive (depending on place of birth), but is a consensual relation, requiring the consent of the United States as well as the individual. This would clearly settle the question of birthright citizenship for children of illegal aliens. There cannot be a more total or forceful denial of consent to a person’s citizenship than to make the source of that person’s presence in the nation illegal. (p.9)

If we are to accept or reject Dr Graglia’s argument, we should first determine if we agree with his representation of the case. Here is the wikipedia page about the Elk v. Wilkins and an HTML version from Justia.

Dr Graglia uses clear an intelligible language to explain that Elk v. Wilkins establishes that someone born within the borders of the United States is not a citizen by birth. This is literally true, but even a cursory reading of the SCOTUS’s ruling reveals that the professor has over-simplified to the point of deception. Take this passage, from the syllabus of the case:

If we assert that the italicized text is irrelevant verbosity on the part of the court, then the bolded text suggests that Dr Graglia’s argument (and Mr Will’s article) are well founded. However, the fact that the Court felt this characteristic (being born to an Indian tribe) was significant enough to not only include in the Syllabus, but lay as a foundational issue in the description of the plaintiff’s case, suggests it might have some significance. I can’t say that the import of being born to an Indian tribe is immediately clear but the Supreme Court saw fit to explain:

Under the Constitution of the United States as originally established, “Indians not taxed” were excluded from the persons according to whose numbers representatives and direct taxes were apportioned among the several states, and Congress had and exercised the power to regulate commerce with the Indian tribes, and the members thereof, whether within or without the boundaries of one of the states of the Union. The Indian tribes, being within the territorial limits of the United States, were not, strictly speaking, foreign states, but they were alien nations, distinct political communities, with whom the United States might and habitually did deal as they thought fit, either through treaties made by the President and Senate or through acts of Congress in the ordinary forms of legislation. The members of those tribes owed immediate allegiance to their several tribes, and were not part of the people of the United States. (Page 112 U. S. 99)…General acts of Congress did not apply to Indians unless so expressed as to clearly manifest an intention to include them.(Page 112 U. S. 100)

This case was brought by plaintiff John Elk, who was born to such an alien nation, left his tribe, severed ties, moved to live among the white man and sought to claim citizenship under the 14th Amendment and was denied the right to vote. The court denied his claim because:

Ok. That’s pretty clear. Indians are recognized as a sovereign (if not foreign) nation who’s members have not more claim to US citizenship than subjects born in a foreign domain. Like, you know, France. How is this in any way equivalent to the child of a sovereign domain born in the United States?

In a creative use of grammar, Dr Graglia reads this passage as “To be a citizen of the United States is a political privilege which no one can assume without its consent in some form,” conveniently omitting the caveat “not born to.” The whole sentence, again, so that our local Grammar Nazis can revel in the power of ignoring two commas:

To be a citizen of the United States is a political privilege which no one, not born to, can assume without its consent in some form.

Does SCOTUS have anything else to say on the matter? Is it possible that Dr Graglia and George Will are correct that the question of foreigners giving birth in the United States was a question un-contemplated when the 14th Amendment was ratified?

Dr Graglia dismisses this case as an illegitimate aberration of American jurisprudence which relies on alien common law without domestic tradition. The reader is welcome is welcome to review United States v. Wong Kim Ark (1898), a veritable bibliography of support for birthright citizenship. Among the “alien” common law decisions used by the court to decide this case:

In negotiation the question of the disposition of an estate of a man born in New York in 1776, the Court resolves complicated questions of how citizenship was derived during the War of Independence. The court finds (38 years before the 14th Amendment) that jus soli is so consistent in American law as to automatically grant American citizenship to children born in New York City between July 4 1776 and September 15, 1776, but not to children born in that city during the British occupation which followed September 15th of that year.

“Nothing is better settled at the common law than the doctrine that the children even of aliens born in a country while the parents are resident there under the protection of the government and owing a temporary allegiance thereto are subjects by birth..” Inglis v. Trustees of Sailor’s Snug Harbor, 28 U. S. 99 (1830)

In deciding the claim of a woman denied the right to vote in Missouri, the Court recognized that within common law “there have been doubts” as to whether to “include as citizens children born within the jurisdiction without reference to the citizenship of their parents”. The court found that women were unquestionably citizens, whether by birth or naturalization, and that

“All persons born or naturalized in the United States, and subject to the jurisdiction thereof are citizens of the United States and of the state wherein they reside.” Minor v. Happersett, 88 U. S. 162 (1874) (Italics in the original.)

Writing six years after the 14th Amendment, the Court ruled that “the Constitution of the United States does not confer the right of suffrage upon anyone, and that the constitutions and laws of the several states which commit that important trust to men alone are not necessarily void”. The astute historian might note that as of 1870 the 15th Amendment had been ratified, and section one read that “The right of citizens of the United States to vote shall not be denied or abridged by the United States or by any State on account of race, color, or previous condition of servitude.” That the court may have erred in writing that the Constitution “does not confer the right of suffrage upon anyone” is self evident, but the question of denying the right to vote on the basis of sex was not resolved until the 19th Amendment was ratified in 1920.

There are, of course, many, many more cases, which the reader is welcome to review at their leisure. At 2100 words, my time is up.

In conclusion, there is more evidence in US Supreme Court rulings, before and after the ratification of the 14th Amendment, to support birthright citizenship than to support the right of citizens to vote, or the right of transnationals to own private property. Claims seeking to redefine the 14th Amendment, made by Dr Graglia, of the University of Texas, and propagated by George Will, of the Washington Post, rely on misrepresentations of a SCOTUS ruling which does not, in fact, support their position. Whether these misrepresentations were the result of malice or incompetence I cannot divine. However, I would respectfully suggest that, by leveraging their social position to propagate these errors, they have undermined the US Constitution in the minds of the citizenry, to the detriment of the Republic and our political culture.

It is a rare power to be able to de-education one’s audience, and a true scandal to see it exercised by a nationally recognized journalist and a university professor. But there you go: that’s how the grown-ups roll these days.